Since Huntington Beach, California has marketed itself as "Surf City" for the past couple decades, and features a statue of Duke Kahanamoku at the heart of town, you'd think they'd be more proud of what may be the world's only "Enchanted Tiki Library."

The 2,400-square-foot Banning Branch Library, began life in 1962 at 22171 Bushard Ave. (about where Lanai Circle now ends) as the tract office for the new Newport West housing tract (Tract 3903). This subdivision -- one of many developed by William Lyon -- featured some Polynesian-themed roof lines, architectural detailing and street names. The tract office was built to echo that theme.

"It's beach party time at Newport West" one salesman with Lyon's Luxury Homes, Inc. told the L.A. Times in 1966. "Residents here are one block from the ocean and the popular entertainment of the season is an early evening beach party." The article went on to describe the tract homes exteriors, which "range from island modern to beach contemporary." Another article described some of the styles as "Tahitian, contemporary modern, and California conventional."

By late January 1967, Newport West's homes were sold and the tract office became the site of a two-day sale of all the furniture and other decor from what had been the tract's model homes.
On March 26, 1968 the whole tract office building was moved down the road and around the corner to 9281 Banning Ave., and was turned into a neighborhood branch of the Huntington Beach Public Library. Ever since then, it has served the citizens of Southeast Huntington Beach well and has become a well-loved landmark to many. Countless current and former residents remember picking out books, getting help from the librarians (recognized fixtures in the community), and participating in the summer reading programs. Sure, the Central Library on Talbert Ave. had much more to choose from, but you could walk or ride your bike to Banning.

In 2007, the City hired an architectural firm to draw up plans for a new 12,500 square-foot library building to replace the current one. Then the 2008 recession stalled that plan indefinitely.

In 2012, the Banning Branch Library was used as a pawn in a game of political blackmail. City "Measure Z" appeared on the November ballot, promising to eliminate a property tax that helped pay for city workers' pensions. Those campaigning against Measure Z, including some city leaders, threatened to cut some of the most basic and well-loved community services if Measure Z passed -- And the Banning Branch was on their short list.

Ultimately, Measure Z was very narrowly rejected by voters and the library stayed. And the 2007 plans to replace the building never materialized either, even after the economy rebounded. The library branch was still operating as of 2020. 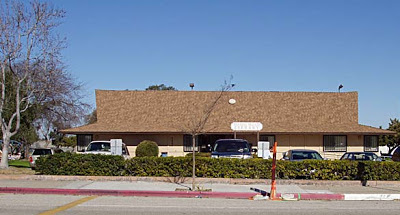 Hopefully, the Enchanted Tiki Library will remain just the way it is. Maybe it could even be gussied up a little with subtropical landscaping and new interiors by Oceanic Arts and local resident Bamboo Ben. It's an extremely rare, well-preserved, and creatively adapted example of something that personified the most important boom in Southern California's history: The mid-century tract office.