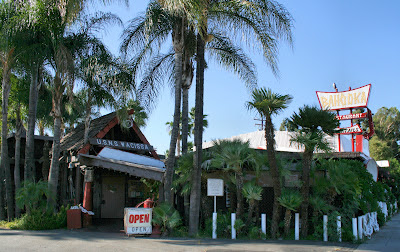 Reader Connie Moreno was the umptee-hundredth person to tell me I simply had to visit Bahooka restaurant in Rosemead, California. So on our way back from the Postcard & Paper Show in Glendale, my friend Phil and I stopped for dinner.

Located at 4501 N. Rosemead Blvd., Bahooka Ribs & Grog is more nautical than tiki, but there are certainly plenty of nods to Polynesian Pop in this landmark. One gets the feeling that some really creative thought and effort went into creating this place initially, but that many layers of additional decor have been added over the decades -- some of which evoke Party City, the local scrapyard, or Uncle Moe's Family Feedbag (with a "whole bunch of crazy crap on the walls") more than tropical islands or Trader Vic's.
Bahooka has a lot of features you won't find at other restaurants, including an anti-aircraft gun in the parking lot and a penchant for lighting your beverages on fire -- even the non-alcoholic ones!

Decor-wise, the highlights at the Bahooka are the more than 100 fish tanks, featuring an interesting array of critters, including an enormous, 35-year-old, carrot-eating pacu named Rufus. (The pacu, a close relative of the pirahna, has become known as "the testicle-eating fish" after some unfortunate incidents in Papua New Guinea's Sepik River. Tip for the day: Never fish naked in tropical rivers.) Although it sometimes feels a bit like dining in a pet shop, the aquariums are visually arresting and add a mysterious blue glow to the dark, maze-like restaurant.
This is the second of what were once two Bahooka restaurants. According to Humuhumu's wonderful Critiki website, the original Bahooka in West Covina was "started by two brothers and a sister in 1967. One of the brothers, Jack, had worked for 10 years at Kelbo's. The building was expanded over the years, which was ultimately its downfall -- it grew over a property line, and in the ensuing dispute, Bahooka lost its lease. In 1980, the building was demolished. Fortunately, four years earlier a second Bahooka location had been opened in Rosemead, which still operates today."
The Bahooka seems to be a family-owned operation, the prices are fairly affordable, and the service we received was prompt and very friendly. Unfortunately, the food was lacking. We each had a steak (noted as one of the house specialities on the menu) -- Phil's with a baked potato and salad and mine with fries and New England clam chowder.

The steaks were cooked as ordered and reasonably well seasoned. But the meat was also tough, thin, and really pretty scarce by the time fat, gristle, and bone was cut away. The salad was drown in dressing (which didn't seem to phase Phil). The fries, though plentiful, weren't quite cooked enough. And the clam chowder (which is generally one of my favorite foods) had a rather un-chowdery flavor to it that kept me from eating more than a few spoons full. Phil's baked potato was okay, but unremarkable.

To be fair, we visited early in the evening on a Sunday, and made no follow-up visit. So I don't know if our experience was unique or par for the course.

The Mai Tai I ordered was quite recognizable as a real Mai Tai (which is more than you'll find in most restaurants these days), and the presentation was nice, but the execution was a little uninspiring. On the other hand, I've probably been spoiled by occasional visits to Don the Beachcomber's and Trader Sam's.

For the record, this is the only Polynesian-ish restaurant I've ever been to that featured pastrami sandwiches on their menu. Just another curious twist. 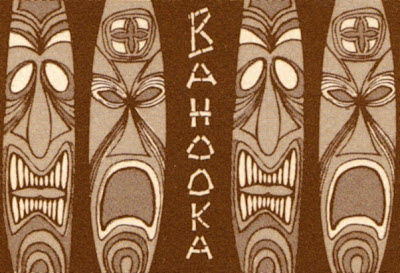 So, should you visit Bahooka? By all means. Stop in, walk around to absorb the atmosphere, have a drink, and talk with their friendly staff. But don't expect to be wowed by the food. And don't try skinny dipping in the aquariums.
Posted by Chris Jepsen at 12:56 AM