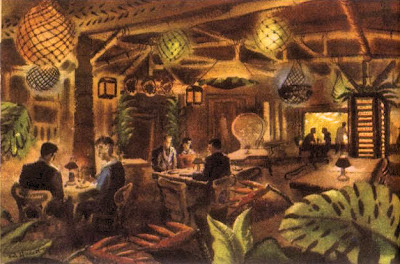 From architecture, home décor and music, to restaurants, literature, theme parks and backyard luaus, the South Pacific was a wildly popular theme throughout Mid-Century America. This was especially true in sunny locales like California and Florida, where primitive carved figures, grass huts, “Aloha shirts,” and lush jungle landscaping seemed right at home. But the tiki or "Polynesian Pop" craze eventually spread not just across the continent but across the world.

It began gradually with pre-War bamboo bars and reached critical mass with Trader Vic's and Don the Beachcomber -- the two restaurants that invented the initial canon of tiki decor and drinks and associated them with fine dining and good times. The theme's popularity grew rapidly in the years following World War II, and peaked around the time of Hawaii's admission to the Union in 1959. Many of the service men who'd been in the Pacific Theater remembered the beauty of the islands, in spite of the horrible events that occurred there. New popular restaurants like The Luau in Beverly Hills refined the tiki decor and menus even further. Thor Heyerdahl's bestselling Kon-Tiki (1950) and James A. Mitchener's Tales of the South Pacific (1947) -- which later became a popular musical -- also fed the trend.
Tiki style mixed traditional designs, artifacts and motifs from the actual cultures of the South Pacific with pop-culture trends of Mid-Century America, and then added a dose of "exotic" fantasy elements that sprang from the minds of various artists. Blended together, they created something altogether new and unique.

Certainly, we can dissect a favorite tiki haunt into its component parts, and admire and study each element for what it is: Masks from Papua New Guinea, war clubs from Tahiti, cartoon-like carved tikis from a nearby nursery, "Chinese" foods invented in New York, Latin-infused jazz from the hotel lounges of Hawaii, etc., etc. But it was the combination of all these elements and more that was instantly recognizable as tiki style. At its worst, it was ham-fisted and cheesy. But at its best it was beautiful, evocative, and mysterious, and provided an instant escape from modern life into an exotic fantasy world.

The tiki juggernaut continued well into the 1960s, but was already sputtering to an end by the time the 1970s arrived. From then on, the classic examples of the style were under assault by real estate developers and changing tastes. Even iconic sites like the popular Kahiki Supper Club in Ohio (on the National Register of Historic Places) were bulldozed.
But just as it seemed the last vestiges of the tiki phenomenon would disappear forever, people began to care about it again. At first, it was only a handful of urban archaeologists, retro-chic hipsters, and nostalgic suburbanites who remembered tiki from their childhoods. But the cult of tiki revival has grown over time. Restaurants have re-opened, Disney's Enchanted Tiki Room has been refurbished, tiki carvers suddenly have tons of customers, the music of Martin Denny is being downloaded into iPods, and tiki's biggest fans gather at large events scattered around the country.

Yes, the revival has been marked with more than its fair share of plasticky Chinese knock-offs and junk. And some folks think hanging a cheap Indonesian mask and a fishnet over their barbeque makes them the next Trader Vic. But there is also quality, creativity, and tiki wonderfulness to be found again. And some of the few remaining authentic tiki remnants of the 1950s and '60s have gotten the shot-in-the-arm they need to survive a little longer, so we can study them, enjoy them, and consider what they can tell us about their era, about their origins, and about ourselves.

The tide has definitely turned.
Posted by Chris Jepsen at 7:28 PM