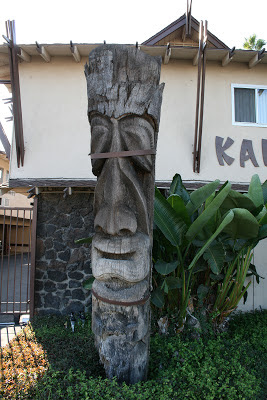 Less than a mile north of the Bahooka restaurant are the Kahlua Apartments, at 5339 Rosemead Blvd., in San Gabriel, California. These apartments appear to have been built in the late 1960s, although I have no solid date of construction. The photos in today's post all come from this complex. I'm a little disappointed that I couldn't get into the central courtyard to get some pictures in there. Somehow I suspect that more tiki goodness awaited beyond the locked gates.

Based on the careful efforts to preserve the tikis and the working condition of the waterfalls, it seems clear that the management understands what a gem they have here. Let's hope the residents do also.
Architect James Black, on a site called The Lower Modernisms, observed that the Kahlua "is equipped with plenty of gables. Technically, this is a gablet roof (also called a Dutch gable roof), a combination of hipped and gabled roof construction. There is some bona fide justification for using this form in a Polynesianized theme building, because such roofs are frequently seen in older Hawaiian buildings. At the Kahlua, whereas the ridge of the roof is flat, the top of the gabled portion slopes up, another method of pursuing that sense of jaunty-casual sought in the aforementioned buildings by the raking of their projected gables." 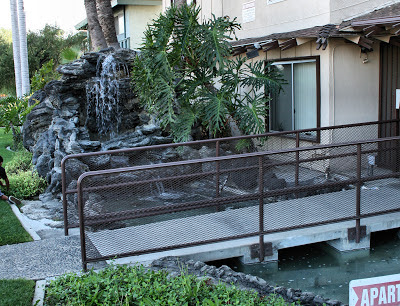 I'm sure Mr. Black didn't intend the term "lower modernisms" as a slight -- but rather as a contrast to the sort of "high modernism" that made all the big architecture and design publications in the mid-20th Century. Still, I always feel a bit reflexively defensive when people use terms like "lower" to describe "tiki architecture", "Googie architecture," and their various cousins. The form of these sorts of architecture fit their function perfectly -- Even if that fuction was advertising apartment rentals or selling cheeseburgers. After all, ever since the dawn of the car culture, snappy roadside commercial appeal has been a perfectly legitimate function for a building's design. 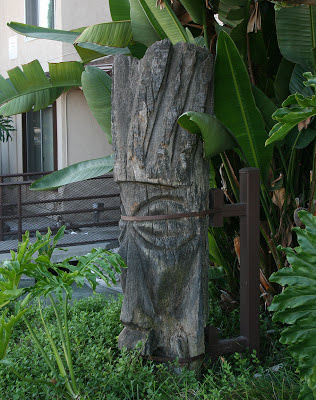