I happened upon Pete and Portia Seanoa in the 1990s, when I drove past their home in Huntington Beach, California and saw their yard full of tikis. Still a little shy about asking people for interviews, I hesitated, but ultimately made a U-turn, parked, and knocked on their door.

The result was the following article, which ran under the title, "The Enchanted Tiki Home," in the Aug. 2001 issue of Otto von Stroheim's trailblazing "'zine," Tiki News, (Issue #17). Today, the Seanoas live in Land O' Lakes, Florida, where Portia still teaches community classes in the ancient Kahiko style of hula and teaches about Polynesian and Hawaiian cultures. Their son, Nuufolau Joel "Samoa Joe" Seanoa, has followed the family showbusiness tradition as a professional wrestler.Sadly, the tikis in front of their old house are gone.

I have tweaked this article a bit for re-publication here, and it now has more color illustrations -- But it still remains largely as it appeared in print in 2001,...

Motorists on busy Slater Avenue in Huntington Beach may be puzzled by the large tikis and tropical foliage surrounding the Seanoa home. Few know Pete Seanoa's story -- A story that includes lions, Elvis Presley, Walt Disney and the preservation of Polynesian heritage.

"I came to this country from Samoa 40 years ago," said Seanoa. "I had no education, but I had a strong sense of who I was and what we were about. Polynesian culture and history isn't recorded, but it's passed down from generation to generation."

One of the traditions passed down in the Seanoa family was the carving of tikis. Sometimes five or six family members work together to carve a tiki from the corewood of palm trees. It's not something they do often, but they feel it is an important tradition to keep alive. 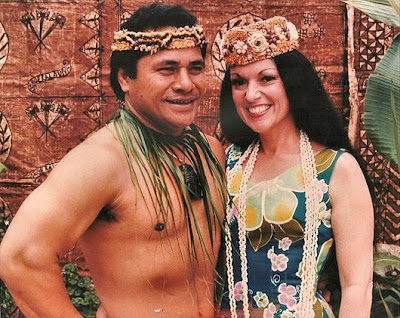 "The younger generation of Polynesians in America are only interested in material things and lose sight of the spiritual," said Seanoa. "On the other hand, we can't live in the past. We must accept what's good about today and tomorrow while retaining our sense of who we are."

For Seanoa, tikis and tiki carving are deeply rooted in the spiritual world.

Each tiki he carves, said Seanoa, "symbolizes me, symbolizes protection and symbolizes our people." 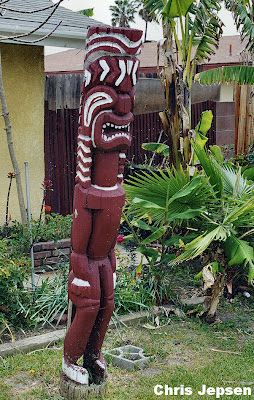 Seanoa carved the tikis displayed in his yard many years ago, for the Lion Country Safari animal park in Irvine, California. When the park closed in 1984, he took them back and surrounded his home with them.

Ironically, he points out that some of the tikis that provide this sense of security have been stolen from his yard. "What are [the thieves] going to do with them?," he asked. "What does it mean to them?"

Today, there are five large tikis in Seanoa's front yard, representing carving styles from numerous Polynesian islands. Four more stand guard over the back yard, amid fishing nets, starfish and other tropical decor. The tallest of the tikis, the Tahitian giant in the side yard, stands nine feet tall and has painted yellow highlights. 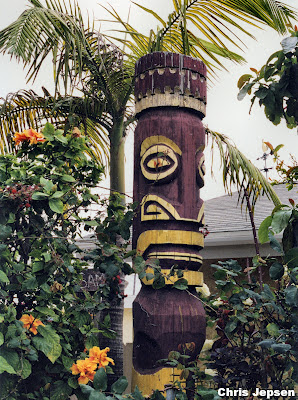 Over the years, Seanoa provided tikis for party planning and prop companies and for a "big tiki restaurant in San Gabriel." He says his work was also featured in numerous films, including Elvis Presley's "Blue Hawaii."

However, Seanoa feels the tikis he has sold are of limited significance. He has little interest in carving tikis for sale these days.

"If it sells, it's not spiritual anymore. A lot of people duplicate [tikis] and it's just a prop."

Seanoa also keeps in touch with his heritage through traditional Polynesian dancing. In fact, he was a member of the "Royal Tahitians" dance troupe which performed at Disneyland from 1962 until 1993. He performed at the Tahitian Terrace restaurant, next door to the Enchanted Tiki Room, for 28 years, winning him a spot in Disneyland's 25th Anniversary Hall of Fame book.

Originally, said Seanoa, the Tahitian Terrace and the Enchanted Tiki Room attraction "were supposed to work together," with diners being entertained by singing tikis and robotic birds while they ate. However, as the project evolved, the restaurant became a separate entity with its own live entertainment.

Seanoa attributes the closure of the Tahitian Terrace to changes in management.

"The Disney family used to have control, but everything changed in the 1980s," he said. 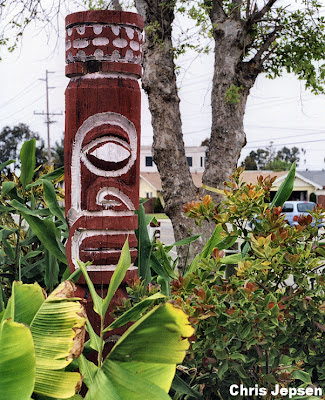 Pete's wife, Portia, began traditional Hawaiian and Polynesian dancing as a hobby in 1963 -- the height of Southern California's "Polynesian Pop" craze -- and soon turned it into a career. In 1965, Pete and Portia, launched Tiare Productions, an entertainment company which still teaches and promotes Polynesian dancing. The dancers have performed around the world at cultural, charitable and corporate events. They have also performed at restaurants, sporting events, colleges, concerts and the Special Olympics.

"They play enjoyable Polynesian music on Saturdays," said one neighbor with a smile.
Posted by Chris Jepsen at 12:50 AM