Sometimes the best way to do urban archaeology is just to find a spot that interests you and start digging. This is one of those times. I'll get the ball rolling, and perhaps someone else will jump in with additional information or new leads to follow.

Years ago, an apartment complex (now called Waterstone Garden Apartments), at the north corner of Red Hill Ave. and Walnut St. in Tustin, California, caught my eye for it's mid-century Tiki design. Recently I stumbled across a couple photos of the place when it was only four years old, and I was inspired to not only drive over and photograph the place anew, but also to spend a bit of time looking for more of its story.  Here's what I've found so far,...
Waterstone Garden was once two separate developments with complementary Polynesian themes. The first, situated right on the corner at 14441 Red Hill, was the Tahitian Terrace complex.
The Tahitian Terrace was built in 1963 -- just a year after Stouffer's Tahitian Terrace restaurant opened at nearby Disneyland -- and began renting units that same summer. 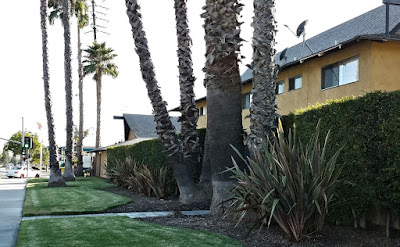 It's one of a relatively small handful of Orange County complexes that have made it to 2017 with much of their original Tiki style still in place. One must assume that a good deal of Tiki decor has disappeared, including the pitched A-frame entryway which has now been replaced with a conventional awning. But much of the original vibe remains.
The aerial photo below shows the Tahitian Terrace under construction (on the left and center), with another complex next door, the Whispering Woods, still only in the process of being graded (on the right). Notice that both complexes were -- like so much local development at that time -- simply carved out of the orange groves.
The second complex now folded into "Waterstone Garden" was the thirty-unit Whispering Woods, at 14421 Red Hill Ave. This second complex was built for real estate investment wiz James T. Bakos of Rossmoor by the Valencia Construction Co. The landscaping was designed by Hugh Paulsen. Although grading began while Tahitian Terrace was still under construction, Whispering Woods was still unfinished as late as spring of 1964. Once finished, no children or pets were allowed, and like its neighbor, it bragged about being "all-electric."
Unfortunately, much less is known about the origins of the Tahitian Terrace, except that the land was surveyed in 1957 by then-owners Mr. & Mrs. Albert Nieblas, who seemed to be movers-and-shakers in the Tustin business and social scene at the time.

In its first years, newspaper ads promoted Tahitian Terrace as featuring "Island Luxury," which sort of sounds like an oxymoron. (I'm picturing Thurston and Lovey Howell driving around in a pedal-powered Mercedes made of bamboo.)
Although taking a less-than South Seas-inspirted name, the Whispering Woods' lava rock chimneys and planters, A-frame pool house, nautical wormwood facades, tropical landscaping and other details reflect a faux-Polynesian influence, even today. Was it intentional?
Eventually, the Tahitian Terrace and the Whispering Woods were brought together under the flavorless yet Flintstones-like moniker, "Waterstone Garden Apartments." Of the two, the Tahitian Terrace half offers the most reward for today's Tiki-appreciating urban archaeologist.
One suspects that there was more of decorative element to some of the buildings once, especially the two-story buildings that now seem so bland once you get below their Tiki rooflines. So many of these kinds of places lost a great deal in being de-Tiki-fied, and it seems like that happened here as well. Still, the rooflines, the outrigger beams, the lush tropical landscaping, and the wonderful pool house make the Tahitian Terrace worth a stop.
The Whispering Woods seems to continue with its identity crisis: Is it or was it Polynesian themed, or did its rustic version of 1960s architecture combined with tropical landscaping and lava walls just give that impression? Perhaps more information will come to light on both complexes in the future. In fact, part of why I'm posting this is in the hope that those who know the story of this corner of Tustin will come forward and share what they know.