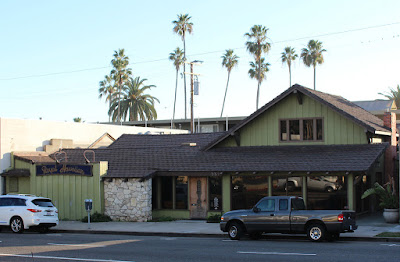 Just before Christmas, I was walking through downtown Laguna Beach, California and stopped to photograph the old Royal Hawaiian (331 N. Coast Highway) through the windows. The landmark restaurant closed in 2012, after 65 years in business, and has been vacant ever since. Francis Cabang originally opened the place in 1947, and it was amazing. It was like walking into a native village deep amid the jungles of a South Seas island. There were Tikis, puffer fish lamps, bamboo, tropical gardens, thatched huts to dine under, "wiki wiki platters," and a delicious signature Lapu-Lapu so big it gave the waitresses carpal tunnel syndrome. Prices were low, portions were ample, and it was a favorite both of locals and out-of-town visitors.

But the  Cabang family sold the place in 2006, and the new owners did a major remodel. The amazing decor was mostly removed, their prices went up, their Lapu-Lapu shrank (a common problem when reaching age 65), and Hawaiian music was replaced with live rock in the evenings. Although this half-assed Royal Hawaiian was better than no Royal Hawaiian, few were surprised when it closed in 2012. 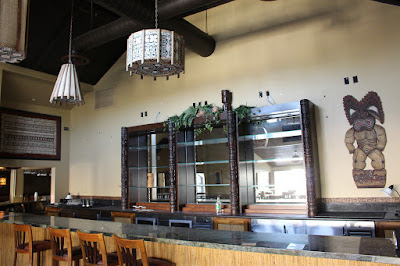 Flash forward again to this past December. As I was shooting photos through the Royal Hawaiian's windows, a man came up and asked what I was doing. I explained about being a historian. He introduced himself as Mo, the restaurant's new owner, and that he planned to re-open the Royal Hawaiian. He also very kindly offered to let me go inside to take better photos. He was waiting for other people to join him there for a meeting. I shot a whole bunch of photos inside, some of which I'm posting here. (More of my Royal Hawaiian photos, past and present, are posted on my Flickr account.)

While snapping photos, I tried to sound Mo out on his thoughts re Polyensian Pop and Tiki, but he didn't have much to say one way or the other. I suggested he research the subject  if he was going to reopen this iconic Tiki establishment. I told him a little about the Tiki revival and suggested he read Sven Kirsten's books, visit the Tiki swapmeets, wander the aisles at Oceanic Arts, etc. He was polite, but I wasn't sure if I was connecting or not. He did say that he wanted to reflect the kind of atmosphere one sees in today's better restaurants on the Hawaiian islands. 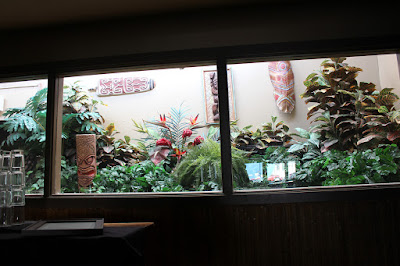 So today I saw this article entitled "Royal Hawaiian Reopens in Laguna Beach" in the online version of Locale Magazine (May 31, 2016). It reads, in part,...


"Today, it is owned by Mohammad Honarkar, and he and his hospitality team—Eric Bostwick, Carlos Godinez, Hasty Honarkar, Dylan Marsh and Brian Smith—are dedicated to bringing this historic restaurant back to life with a new and improved twist.
"...The Royal Hawaiian will feature décor that will only be slightly updated from the previous renovations. Classic tiki vibes will be present, but will be combined with a new age feel that will ...make Laguna feel as though it has become a modern version of Hawaii. The Royal Hawaiian’s return will feature a menu that is filled with classic Hawaiian dishes made more unique with creative twists and many colorful handcrafted cocktails. Returning customers will also see the homecoming of the famous Royal Hawaiian Ribs and the popular cocktail dubbed the Lapu Lapu." 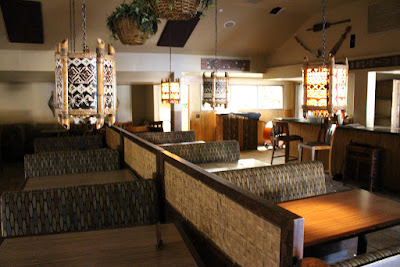 I'll start by thanking these folks for reopening what was once among the last great vintage Tiki establishments. I wish them luck and I'll definitely come try it shortly after it opens. And if it's good, I will certainly be a repeat customer. But here's my two cents:

First, they need to roll back the misguided changes made by the last owners, not double-down on them with more modernization. It's time to hire "Bamboo Ben" Bassham or Daniel "Tiki Diablo" Gallardo to re-tikify the interior, and hire someone who knows vintage Tiki cocktails to get the bar off to a good re-start. And yes, the menu needs some amusingly non-authentic favorites, like the old "Pele Goddess of Fire" (a scoop of vanilla ice cream with a flaming sugar cube in the middle).

When you buy a restaurant like the Royal Hawaiian, nostalgia is your biggest asset. You get a built-in audience and a line at your door on opening night. But that same nostalgia requires a certain willingness to commit. Let's hope the new folks "get it." There's nothing worse than disappointing an enthusiastic built-in audience. (Just ask George "Stinky Prequels" Lucas.) On the other hand, play your cards right and you'll be the most popular place in town. Again!
Posted by Chris Jepsen at 12:32 AM