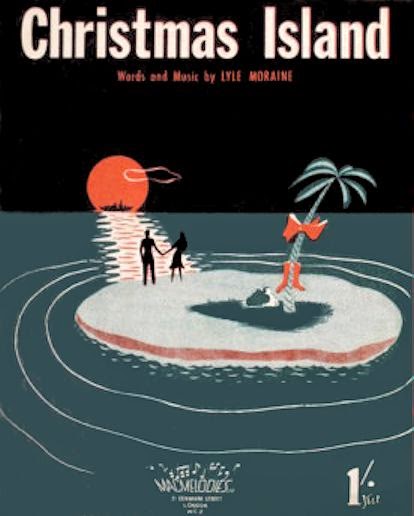 I've been hearing the old novelty song "Christmas Island" a lot more these past couple Decembers, and I thought it was high time to find out where it came from. First, here are the lyrics...

How'd ya like to stay up late
Like the islanders do?
Wait for Santa to sail
In with your presents in a canoe
If you ever spend Christmas
On Christmas Island
You will never stray for everyday
Your Christmas dreams come true


The song was written by Lyle Moraine (1914-1988) in 1946 and was first recorded that same year by the Andrews Sisters, backed by Guy Lombardo and his Royal Canadians. It made it to #7 on the pop charts that year and stayed in the public eye throughout the 1940s. It's been recorded by a number of other folks over the decades. (The recent version I keep hearing on "Musak" is from Jimmy Buffett.)

Moraine had lots of bit parts in movies, but never became a star. He also wrote other songs, but "Christmas Island" was his most noteworthy hit.

So, how WOULD ya like to spend Christmas on the actual Christmas Island in the Indian Ocean?

That depends. But it seems unlikely that "your Christmas dreams" would come true."

Discovered on Christmas Day in 1643, by an English East India Company ship, tiny Christmas Island is now home to just over 2,000 people and scads of horrifying-looking "coconut crabs" -- the largest land-living arthropod on earth. They have powerful claws and can climb trees. (So there might be several right above your head just waiting to drop down on you!) They are also known as "robber crabs" which lead me to believe they may have long arrest records we should be concerned about.
If that weren't enough, another 100 million red crabs migrate across Christmas Island each year in one enormous herd, or gaggle,... or whatever you call a large group of crabs. (I think a "floozie of crabs" has a certain ring to it.)

And once you get past the fauna, you'll find that only a minority of Christmas Island residents even celebrate Christmas. Although it's a territory of Australia, the population is mostly of Chinese descent. The religious break-down is about 75% Buddhist, 12% Christian, and 10% Muslim.

But those who do celebrate the day do so with a combination of Christian and Micronesian traditions that include multiple days of dance and choir performances.

No, you won't see "Santa sail in with your presents in a canoe." But you may meet some Asian refugees who've drifted around the ocean in various rickety boats. These days, Christmas Island is largely known as a way-station and detention center for refugees wanting to come to Australia.

And although, as a Southern Californian, I'm all in favor of a sunny Christmas, it does seem like there should be a little snap in the air during the holidays. You won't find that on Christmas Island either. The average low temperature is 65 degrees, and the average high temperature is in the low 80s,... all month,... every month.

In short, you're probably better off enjoying Christmas wherever you already live. Please do so.

Merry Christmas to all!
Posted by Chris Jepsen at 12:59 AM