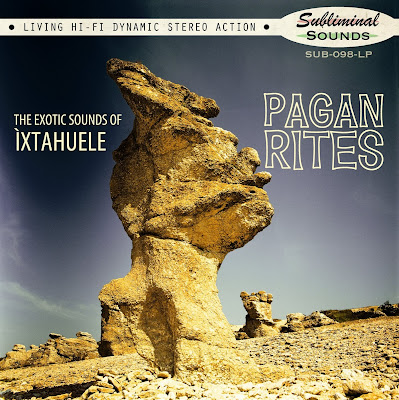 I stumbled across Ixtahuele's EP, ""The Exotic Sounds Of Ìxtahuele" in 2012, and was pleasantly shocked to discover a modern group that truly captured the classic sound of exotica.

Many other modern takes on musical exotica diverge from the sound (if not he spirit) of their inspiration. Often the instrumentation is off (e.g. synthesizers), the songs are indistinguishable from one another (i.e. the "New Age" effect), or it's merged with some other form of music like surf rock. Some of this updated exotica is excellent in its own right, but it often does not transport you to the heyday of Martin Denny and Arthur Lyman.
Ìxtahuele, however, is exactly on target. They write their own material and perform it, expertly, on good old fashioned musical instruments. The group includes vibraphonists/percussionists Wictor Lind and Mattias Uneback, percussionist Johan Hjalmarsson, pianist Carl Turesson Bernehed, and bassist Henrik Nilsson.

The group hails from Gothenburg, Sweden, which is not the locale that comes to mind while listening to their music. But what better enviornment to dream up tropical landscapes than in a place that commonly drops to 23 degrees in the winter? Escapism has long been a key factor in Polynesian Pop. Anyway, if Thor Heyerdahl, Sven Kirsten and Christopher Lars Jepsen are any indicator -- Northern European types have a natural affinity for all that relates to tiki.

In May 2013, Ìxtahuele released their first full album, "Pagan Rites." If anything, it's even better than their EP. It's been in "heavy rotation" on my MP3 player for several months now. Like the best of Martin Denny's work, it doesn't grow stale with repeated listening. If you didn't know better, you'd swear "Pagan Rites" was a lost, Mid-Century classic of the genre.

Tracks include Black Sand, Rarohengan Dance, Brugmansia, Stone Gods of Bimini, Orust Luau, Lotus Eaters, Searching For Souq, Huahine, Dengue Fever, and Gardens of Mu. A few of these also appeared on the EP, but get somewhat different arrangements for the album.

A quick search of the Interwebs will turn up several ways to purchase the album. I bought the actual CD, and I'm glad I did. The recording quality is good, and I can only assume that it would loose something in MP3 format.

Ìxtahuele's appearance at this year's Hukilau in Florida was well received. If there's any justice in the world, these gifted fellows should soon be wildly popular in the tiki/exotica revival scene.
Posted by Chris Jepsen at 7:57 PM