May 9, 2013 was a bad day for tiki fans. Not only did it turn out to be the one-day-earlier-than-expected last day of the Bahooka, it also saw the last post at The Sleepy Lagoon. Since 2009, "Musik-Kurier" of Berlin has been posting digital version of great but often little-known Mid-Century exotica LPs on his Sleepy Lagoon blog. It was an outstanding way to discover artists that might otherwise has slipped under our radar.

In a recent post on Tiki Central, Musik-Kurier wrote, "Since 2009, I've run 'The Sleepy Lagoon'-Blog. I think now it's time to introduce the blog to Tiki Central. It's a music-blog for Exotica and related music. I offer already more than 100 posts with the possibility to listen to complete albums direct on the website... I don't make many words in my posts, also because English is not my mother tongue... The motto is Pure Music, from me to you. Enjoy... and let me know what you think about it." 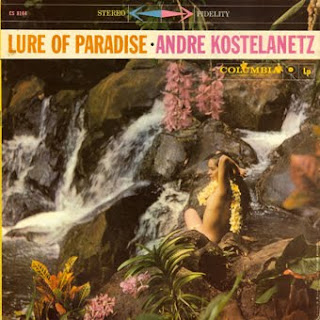 Personally, I think it was great. In fact, at least a fourth of the tracks currently on my MP3 player can be directly or indirectly traced back to discoveries I made at The Sleepy Lagoon. These include rare tracks from the likes of Alex Keack, Axel Stordahl, Don Ralke, Ethel Azama, Gene Rains, George Cates, Jimmy Namaro Trio, John McFarland, Johnny Spencer and the Kona Koasters, Rex Kona, Stanley Black, Ted Auletta, The Shangaans, and one of my favorite new exotica groups, Ìxtahuele.

The Sleepy Lagoon led me not only to listen to its posted (generally long-out-of-print) albums, but also increased my downloadable music purchases on Amazon exponentially as I searched for additional albums by the best artists. 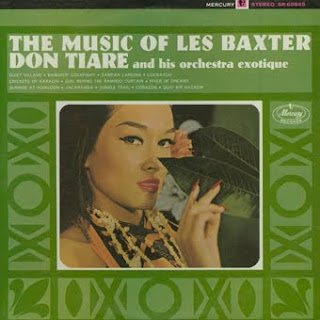 Musik-Kurier's last post, yesterday, was titled simply "THE END," and read as follows: "Divshare closed my account and all files and playlists are deleted. I thank everybody for the attention in the last four years. Aloha!" It was followed by a long string of well-wishes and farewells from regular readers.

We can only assume that this shut-down is another example of the recording industry shooting itself in the foot -- discouraging sales of albums that haven't been in demand since the 1960s. One can only wonder what other musical horizons would have been opened to modern exotica fans had The Sleepy Lagoon been allowed to continue.
Posted by Chris Jepsen at 8:38 PM